The topography of California is a wonder itself. There are diverse landscapes and the east boasts the Cascade Range. The famous Sierra Nevada in the west is the epitome of natural beauty. Again, the northern and southern ranges have several mountains along the Peninsular ranges.

Moreover, the extended Baja California Peninsula homes beautiful giant mountains that will appall you. If you want to explore California’s beautiful mountains, then you are in the right place.

Here is the list of the major mountains in California for you to go to next.

With an elevation of 14,505 feet, Mount Whitney is the highest mountain in the entire United States. It is located in the Sierra Nevada. For an average hiker, it will take about 8 hours to hike up the mountain. From the peak, you can see the boundary between California’s Inyo and Tulare counties.

On the west side of the mountain, the Sequoia National Park is situated. Moreover, on the eastern slopes, you can roam into the Inyo National Forest. The view from the summit is breathtaking and the surrounding area of the mountain is a treat as well.

Mount Williamson is the second-highest mountain in California as well as the Sierra Nevada. With an elevation of 14,379 feet, it is the sixth-highest summit in the US. The mountain falls under the John Muir Wilderness of the Inyo National Forest.

The nearest trail access is at the southeast side of Shepherd Pass. The surrounding area of the mountain is remote, so you might find it hard to access the mountain by hiking. Nevertheless, this imposing mountain is popular for its isolated hiking trails.

With an elevation of 14,248 feet, North Palisade is the third-highest mountain in the Sierra Nevada range. In California, impressively, it is the highest peak of the Palisades group of peaks in the central part of the range. There is a small glacier that can be accessed easily and on the northeast side of the mountain, you will see plenty of highly prized rock climbing routes.

You should also check out the best waterfalls in California.

Starlight Peak a sub summit on the massif of North Palisade which sports beautiful views. It is one of the most difficult summits to reach, but it has accessible routes.

Even though the different kinds of rock formations make it hard to climb, the aesthetic nature is magnificent to explore gradually. So many photographers enjoy their time climbing this 14,226 foot mountain.

Located in the Palisades, Mount Sill is included among a group of prominent rock peaks. With an outstanding elevation of 14,159 feet, Mount Sill is one of the fourteeners of the Sierra Nevada. There are several small glaciers found on their flanks. Additionally, the hikers have to be careful to not slip on the glaze of frozen glaciers.

Polemonium Peak is one of the seven fourteeners in the Palisades region of the Sierra Nevada, California. With its giant stand, it manages to overshadow the North Palisade, which is the famous neighboring peak.

Due to its exclusivity, this peak is very famous in California among travelers and hikers. The climb is not complex, so for beginners, it is a great mountain to test limits.

You might also want to try visiting the most beautiful places in California.

Mount Russell has an elevation of 14,094 feet. The peak of the mountain falls in the Sierra Nevada mountain range, and it is the seventh-highest peak in California.

The area of the mountains is between the boundary between three natural areas-the John Muir Wilderness, Sequoia National Park and the Inyo National Forest. You can explore Tulainyo Lake, which is situated in the southwest of the mountain. In the southern Sierra, this lake is the largest high alpine lake that has stunning views.

Split Mountain is another fourteener in the Sierra Nevada with an elevation of 14,064 feet. In California, it is located near the southeast end of the Palisades group of peaks. It is the only fourteener in the watershed of the South Fork Kings River and there are beautiful forests along the river. This mountain is also the eighth-highest peak in California.

Mount Langley rises to 4,000 feet of elevation, and it is situated on the crest of the Sierra Nevada. Between Tulare and Inyo, this mountain is in the east of the Owens Valley. Along the border of Mount Langley, you can visit Sequoia National Park.

Moreover, the John Muir Wilderness is located at the heart of the Sierra Nevada Mountains, so you can explore the entire area once you visit the mountain.

At 14,025 feet, Mount Tyndall is the tenth-highest peak in California. The mountain is named after the Irish mountaineer and scientist, John Tyndall. There are several directions and trailheads that lead to the peak of the mountain. If you take the Shepherd Pass trail, the path is hard to hike, so other routes are preferable, although this trail is the shortest one.

Middle Palisade is a 14,018-foot peak, located in the central Sierra Nevada mountain range of California. It is also a fourteener and is one of the parts of the Palisades group. It is comparatively easy to climb to the peak because there are several routes to choose from. This peak is the twelfth highest in the state.

In the Sierra Nevada of California, Mount Muir is a peak with an elevation of 14,018 feet. The name of the peak is named after a Scottish geologist, and founder of the Sierra Club, John Muir. The two sides of the mountain, east and west, have a diverse ecosystem, so you will enjoy the magnificent diversity in the view.

With a rise of 14,009 feet, Thunderbolt Peak is the thirteenth-highest peak in California and is also a peak included in the Palisades group of peaks in the Sierra Nevada of the state. The name of the mountain is kept in commemoration of the event where a well – renowned climber, Jules Eichorn was struck by lightning.

With an elevation of a peak between 13,000 and 13,999 feet, Mount Barnard is a beautiful mountain located in California. Due to its distinction of being the highest thirteener, the mountain is a popular one among climbers and explorers. The name of the mountain is kept in the honor of the renowned astronomer, E. E. Barnard.

Mount Humphreys is the highest peak in the Bishop area. It is located on the Fresno-Inyo county line of California. The surrounding area of the mountain is breathtaking with diverse wilderness and a colorful ecosystem. Named after the chief engineer of the US Army, Andrew A. Humphreys, this mountain is ideal for beginner level hikers.

In Siskiyou County, California, Mount Shasta is a volcano that may still be active. It is located near the southernmost point of the Cascade Range. It is the fifth-highest peak in the state and the second-highest summit in the Cascades, rising to a height of 14,179 feet.

The southernmost active lava dome volcano in the Cascade Range of the Western United States is Lassen Peak, also known as Mount Lassen. Another active volcano, Lassen Peak, can be found in northern California’s Cascade mountain range, at its furthest southern point.

With more than 350 intertwining mountain ranges in California, it has the most diverse landscape in the US. Whether you want to hike or explore, these giant mountains are filled with natural wonders and stunning ecosystems. And, with this list of the major mountains in California, you will be able to plan your exploration quickly. 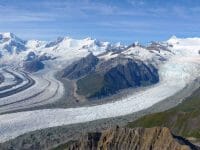 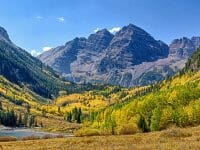 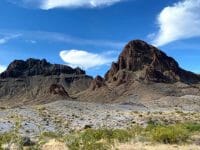